Vukasin Krstic, Belgrade: The situation is unclear, but clearly and dangerously unhealthy

Home|Vicinities chronicles|Vukasin Krstic, Belgrade: The situation is unclear, but clearly and dangerously unhealthy

Vukasin Krstic, Belgrade: The situation is unclear, but clearly and dangerously unhealthy

The European Parliament has previously called on EU member states to provide access to cannabis to anyone who would need it. Serbia, on the other hand, is still ‘considering’, and continues to brutally prosecute its users. 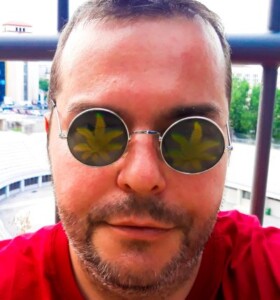 Scientists and doctors globally have recognised that Cannabis can be medically helpful, but also that it is not harmful, let alone dangerous, to its users. It has even been removed from the UN Narcotics List in late 2020, with the message that it should be available to everyone and everywhere. The European Parliament has previously called on EU member states to provide access to cannabis to anyone who would need it. Serbia, on the other hand, is still ‘considering’, and continues to brutally prosecute its users.

The Permanent Mission of the Republic of Serbia to the UN in Vienna was officially notified on January 21, 2021 that this decision is applicable ‘in respect of each Party on the date of receipt of this notification and thereafter the Parties shall take  measures as may be necessary under this Convention’.

The Commission for Psychoactive Controlled Substances, in a session held on the 8th March this year, avoided adjusting the Serbian List to match the UN, thereby putting Serbia in a difficult position. It is also possible that Serbia may be put on the UN Black List as the Republic of Serbia officially acknowledges that it cannot meet international standards in the trade of psychoactive substances and precursors. All UN members would in this case be ordered to stop issuing import and / or export licenses for all UN-controlled substances, most medicines, raw materials and finished products.

Positive legal regulations say that someone under suspicion for use of Cannabis would face more favourable valid legal regulations, meaning  that as of January 21 this year, Cannabis has been decriminalized in Serbia. Each day the application of the Convention List or adjustment of the Commission List is delayed costs the State between fifty and one hundred thousand euros in costs of proceedings and detentions related to Cannabis, because the Commission’s indisputable obligation is to remove Cannabis from the Drug List and keep it only in the category of medical drugs.

On the other hand, leading domestic scientists from state universities and institutes, in cooperation with the private sector, were among the first in the world to make decisive scientific breakthroughs in the standardization and development of innovative drugs based on Cannabis.

Let’s not neglect the benefits that Serbia could reap by legalising Cannabis, which has been traditionally grown in our country, and cultivation conditions are among the most favorable in the world. Ignorance on the matter is currently threatening the position of industrial hemp as well.

It is a fact that the State has given some ‘signs of life’ this year, but also that some parts of the Apparatus have given in to pressure from low-interest groups. Mrdja, Milos, Natasa, Mihalj … are just some of the people we know, of the thousands who have been  or will be imprisoned alongside the worst criminals.

We maintain the flame of the WHO, the EMA and the UN in the hope that we will not need help from the ‘outside’, which will likely be needed in this area as well. Because Mrdja will soon be locked up for three and a half years, regardless of the fact that the Court itself determined that he wanted to help his wife, twin brother and himself to successfully battle epilepsy.

The situation is unclear, but clearly and dangerously unhealthy

Vukasin Krstic, Initiative for Change in the Legal Regulation of Cannabis, IRKA