Vladimir Radojicic, Belgrade: For the smiles and health of our children

Home|Vicinities chronicles|Vladimir Radojicic, Belgrade: For the smiles and health of our children

Vladimir Radojicic, Belgrade: For the smiles and health of our children

It may be difficult to believe, but the 16 coal powerplants in the Western Balkans release more sulfur dioxide than the 250 power plants in the EU. The effects of this pollution reach as far as Russia and Egypt. 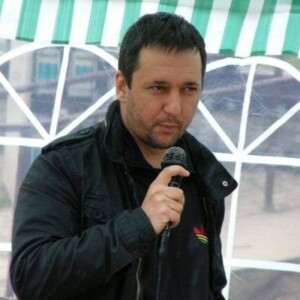 It’s a Sunday. We are descending down a winding mountain road, leaving the air spa, rushing towards the valley smog. I’ve decided to spend this gorgeously sunny January day with a spring feel enjoying the winter wonderland of Divcibara mountain. After her first ski lesson, my six year old daughter Drina is filled with impressions: ‘Hey dad, did you see me make the ‘pizza slice’!’  She’s proud in telling me about the new breaking technique she was taught. Drina’s younger sister, two year old Sara, is telling her mum about all the joys of laying on a tire, gliding on the snow, thanks to her parents’ arm strength. There is the inevitable story of the Snowman and his carrot-like nose, while she’s begging to get on skis just like her sister the next time we go.

Family winter wonderland is interrupted by, seemingly, fog and a specific smell – a combination of smog and fog as we get nearer to Kosjeric. Kosjeric has serious air pollution problems, like many cities in Serbia and in the Western Balkans.

The curtain of valley smog distracts me from the skiing and children’s’ snowy smiles, towards the harsh reality. I remember that at least 13,500 people in the Western Balkan region die prematurely due the consequences of air pollution (a statistic by the World Health Organisation). Every year, a town the size of Pozega, 23km from Kosjeric, vanishes. It may be difficult to believe, but the 16 coal powerplants in the Western Balkans release more sulfur dioxide than the 250 power plants in the EU.

The effects of this pollution reach as far as Russia and Egypt. Only coal pollution causes economic damage through the healthcare costs in the Western Balkan countries – estimated at a minimum of 1,9 and a maximum of 3,6 billion euros a year. Western Balkans taxpayers pay 3,6 billion euros a year to treat cancer, asthma, cardiovascular disease, sterility, and many other illnesses which are often a consequence of air pollution.

I am angry, yet determined to make steps towards bettering the situation, worried about my children’s health. I’m content that the Right to the City is part of the Balkans United for Clean Air campaign. I’m looking forward to an alliance with the European Fund for the Balkans, and other regional and Serbian organisations. The campaign words encourage me:

We, citizens of Albania, Bosnia and Herzegovina, Kosovo, Montenegro, North Macedonia are all equally exposed to air pollutants, regardless of our age, gender, faith, nation, or language. We are aware that the polluted air we breathe every day is poisoning and killing us. It comes from heating plants and factories which use fossil fuels, from industrial machinery, traffic, individual furnaces. The poisonous cloud over the Western Balkans is costing us our lives, health, fertility, ability to work, the future of our children and the growing healthcare costs across the Western Balkans.
We do not consent to dying of air pollution, we do not consent to having our children grow up using asthma pumps, and we do not want to pay additional healthcare costs because of pollution.

The need to breathe clean air has united us to fight in solidarity through our Balkans United for Clean Air campaign.

I would like to invite all organisations and individuals to join the   Balkans United for Clean Air Campaign via this link: http://bit.ly/UjedinjeniBalkan.

My reasons to fight are Drina and Sara’s health and snowy smiles.

What are you reasons for joining the fight for clean air?

Vladimir Radojičić, Environmental and social activist, dedicated to the work and development of local communities in Serbia for the past sixteen years.