There is no peace when political dissidents are physically attacked; when death threats arrive and when family members are threatened, when there are ultimatums about staying employed; when  messages like ‘Either you love our flag on your facade, or you’re a traitor’ arrive. 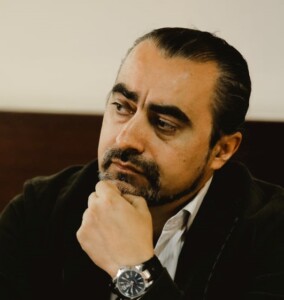 War is, by definition, an intense armed conflict between states or nations. If we use this lens, then many states or nations seem to already be living in peace, and the few that have fallen off the peace track will somehow return to it – peace is a natural state, and war is unnatural, and therefore cannot last long; reminding ourselves of peace is a ceremonious matter, and peace processes belong to the policies of unhappy locals. But is that really the case?

Only a somewhat broader understanding of war leads us to the war on terrorism or the mafia, media wars, the war of nerves. States and nations, as well as their conflicts, do not have to be the most important determinants of war. Information bombarding, harassment, threats, being left on hold – show that peace is lacking much more often than it seems. There is no peace when any form of violence is present.

Physical violence, the most obvious one, implies any damage done to the physical body of another person, directly (with a weapon, object) or indirectly (neglect, omission)

Subtle violence is a form of violence that is reflected in all communication that forces someone to believe all problems are their fault only. For example, emotional blackmail in the form of ‘If you really love me, then…’, ‘If you leave me, I will..’. Fath points out that this type of violence is so specific because good intentions seem to be present here – the bully believes they are preserving the relationship between them and the victim. The consequences, however, are the same as those of psychological violence.

Structural violence refers to the conditions under which social structures have a detrimental effect on the people living under them. Examples are noise and pollution, but also monotonous working conditions and work associated with high health risks.

Legal violence is all the violence perpetrated by the government, while the government itself does not suffer consequences from engaging in those same crimes. The most visible forms are  activities of the police, army, judiciary, but also other authorities.

Violence tends to be interpreted differently: as a means to achieve a goal (motive, intention); as loss of control (ability to control); as fascination (affection, general trait of man); variable status within the development process (development effect).

There is no peace when political dissidents are physically attacked; when death threats arrive and when family members are threatened, when there are ultimatums about staying employed; when  messages like ‘Either you love our flag on your facade, or you’re a traitor’ arrive; ‘we are friends, and what you are doing is not what friends do (therefore,  you are the enemy)’; when  the quality of water, air, housing, security, and working conditions is getting lower every day; when the government creates an environment for persecution of citizens, activists, journalists, trade unions and other actors which should form part of a civil and democratic society.

The principle behind violence is the so-called One-and-only principle – in the form of one person, idea, policy, religion, nation, race, etc.

Peace is coexistence, in all its complexity.