Ljupcho Petkovski, Skopje: Is real democracy possible in the Balkans?

Ljupcho Petkovski, Skopje: Is real democracy possible in the Balkans?

North Macedonia and Bosnia and Hercegovina are countries born captive – both are children of peace agreements (Dayton and Ohrid), in which ethnic elites (the inner circle of the model shown below) have incorporated their interests – to be able to control both money and the hearts and minds of the people. 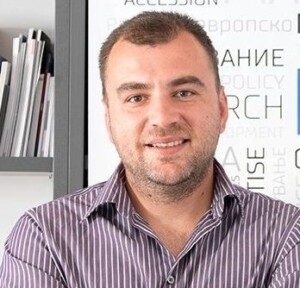 This text is inspired by the book “Sell Out, Tune Out, Get Out, or Freak Out?”, which was recently published by the Democratization Policy Council and Eurothink from Skopje.

The book studies the phenomenon of a captive state in the “ethnocracies” of Bosnia and Hercegovina and N. Macedonia and its reflection on the ways in which the “people” react to systemic injustice. The book “depathologizes” political violence and extremism, explaining it not as a consequence of the “depravity” of individuals, but as one of the “normal” responses to the systemic factors produced by the captive state.

Macedonia and Bosnia and Hercegovina are countries born captive – both are children of peace agreements (Dayton and Ohrid), in which ethnic elites (the inner circle of the model shown below) have incorporated their interests – to be able to control both money and the hearts and minds of the people. The elites rely on their “infantry”, the “ethnic selectorate”. These are the individuals who, under the informal authority of the elites, control the institutions (third round), allocating resources (financial, impunity, employment) to the loyal and punishing the disloyal, thus forging tacit consent for the captive state. 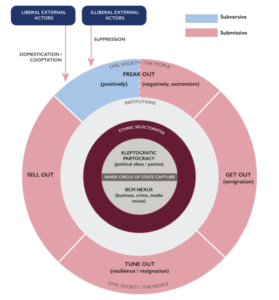 The fourth circle in the model is the citizens. When people live in a captive system, in which, as Macedonians and Bosnians say, “even school hygienists cannot be employed without a party card”, then people use different strategies to adapt to a system that produces feelings of injustice.

Many people, and most of them not for economic reasons, but for the quality of life, leave (Get Out). Some develop a lack of interest in politics, directing the energy towards their private life and the daily battles (Tune Out). Many do not problematize the game either because they receive privileges from the system such as employment and access to public resources (transactional relationship) or because they are truly fascinated of the ruling ideology. This strategy is Sell Out.

The last and rarest strategy is Freak Out – either negative or positive. Sometimes, people are alienated from the system to the extent that they accept extreme political ideologies, which give a sense of belonging, mission and purpose. Far-right ideologies and Islamic extremism are reciprocal and represent two sides of the same coin – both missing the mark by shifting the blame for the corrupt system to the minorities, fellow citizens and the weaker. Negative radicalization supports the status quo.

Freak Out is positive if it articulates political visions based on the ideas of justice and equality. The anti-corruption protests in 2014-2016 in Macedonia were an example of positive radicalization of the enraged people, thirsting for justice. The same goes for the protests in Bosnia in 2014. Both protest cycles did not produce systemic change. However, without positive radicalization, i.e. the “occurrence of progressive people”, there is no development of inclusive political identities that shake the corrupt ethnocentrism. It is also not possible to uncapture captive states.

How does the liberal international community, which includes the EU and the US, react to the various forms of radicalization (Freaking Out)? The analysis shows that in terms of negative radicalization, excessive focus and resources are placed on addressing the issue of CVE (Countering Violent Extremism), which in a large number of cases means targeting Islamic radicalism and returnees from the battlefields in Syria. A small, growing and insufficient focus in the programs is also placed on the extreme right-wing radicalization.

However, the most interesting attitude is the one of the liberal international community towards positive radicalization, which, surprisingly, comes down to “domestication” and “co-optation”. This relationship is based on the assumption that only corrupt ethnocentric elites can deliver stability. It resonates with old prejudices from the 1990s, according to which ethnic hatred, rather than structural factors such as corruption, is smoldering and could easily destabilize the region.

Local captives manipulate this prejudice by posing as the sole guarantors of stability. That is why we have a contradiction: on the one hand, calls for “uncapture” of the countries, such as those of the European Commission, and on the other hand, the expectation that the institutional approach and cooperation with captives will bring results. Is democracy possible in the Balkans without positive radicalization? The answer of the authors of the report is “No”. Corruption, not the backwardness of the people, is the biggest threat to stability.

Ljupcho Petkovski is a political scientist and independent researcher from Skopje, with decades of experience in social research.