Jovo Martinovic, Podgorica: How a marriage of interest failed

Home|Vicinities chronicles|Jovo Martinovic, Podgorica: How a marriage of interest failed

Jovo Martinovic, Podgorica: How a marriage of interest failed

It is paradoxical that the Serbian Orthodox Church in Montenegro has managed what the civil sector, civic activists and the opposition have not in thirty years – created a critical mass for the first peaceful change of government in Montenegrin history. 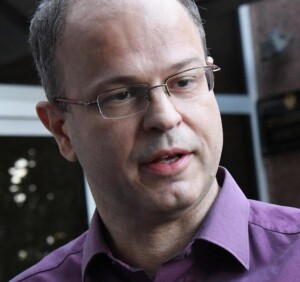 Few European countries, apart from Wojtyla and Wałęsa’s Poland, have had this strong of an intertwinement between politics and religion as is the case with Montenegro. While the state has long regulated status issues with the Islamic Community and the Catholic Church, there are still a number of open issues with the majority Serbian Orthodox Church (SOC). Moreover, the recent instalment of the new Montenegrin Metropolitan Joanikije II in the Cetinje monastery is unprecedented.

Along with the incense smoke that accompanied the ceremony in the chapel of St. Peter, smoke hovered over the whole of Cetinje – this one from tear gas that had been thrown. Nearly two thousand police officers secured the ceremony from the same number of demonstrators who aggressively tried to prevent it, including setting up roadblocks. Joanikije and Serbian Patriarch Porphyry had to land by helicopter and run to the monastery under the protection of heavily armed police. Polarized Montenegro was on the verge of bloodshed.

When we look at Poland, the Catholic Church was a catalyst for democratic change and the fall of communism in the 1990s, while in Montenegro the fall of the renamed Communist Party happened only after 30 years, under the pressure of protests initiated by the Orthodox Church.

But the same SOC, which alongside the opposition (and with the help of the West) defeated President Milo Djukanovic’ government, steeped in crime and corruption, in August last year, was a catalyst for other changes in the 1990s.

At the time, the Serbian Orthodox Church, together with the same Djukanovic, was on the side of Slobodan Milosevic’s war-inciting regime, which brought bloody disintegration and economic collapse to Yugoslavia. The activities of the church in Montenegro under the late Metropolitan of Montenegro Amfilohije, from his arrival in Cetinje in 1990 until his death in October 2020, were accompanied by numerous controversies. For the first fifteen years of his reign in Cetinje, Amfilohije explicitly promoted the Serbian view of the identity of Montenegro, denying Orthodox Montenegrins of their ethnic identity. The political iconography of the forces defeated in the Second World War was emphasized as well; he gained bitter enemies among people who care about Montenegrin identity and anti-fascist heritage.

The antagonism went so far that in 1993 a part of the Montenegrin bloc embarked on the political renewal of the once independent Montenegrin Church, which disappeared with the violent extinguishing of the Montenegrin state and the founding of the Serbian Orthodox Church in the first Yugoslavia in 1920. So identity divisions among Montenegrins also acquired a religious component, although most Montenegrins do not practice religion beyond what constitutes cultural heritage. The consequence is that parallel Christmas Eve bonfires and Christmas celebrations are organized every year in Cetinje and other cities.

Since 2006, Montenegro has renewed its independence, the reconstruction of which, as strange as it may seem, was also contributed by the late Amfilohije and his obvious non-interference in the referendum campaign – to the disappointment of the pro-Serbian bloc. The church also silently witnessed the economic transition of Montenegro, or, rather, the devastation of social property and its transfer into the hands of Djukanovic and his tycoons. In return, the Metropolitan received the blessing of the regime to continue his spiritual mission, including construction projects on legally protected cultural assets. The marriage of interest ended at the end of 2019, when the former government resorted to the seizure of church property via a new law.

It is paradoxical that the Serbian Orthodox Church in Montenegro has managed what the civil sector, civic activists and the opposition have not in thirty years – created a critical mass for the first peaceful change of government in Montenegrin history.

Jovo Martinovic, is an independent journalist for many renowned international and local media outlets