The museum opening initiated a number of other parallel processes, the Walter Defends Sarajevo start-up tourist tour, awaking interest of both the Chinese and global film industries for remakes of films by Siba Krvavac.

The opening of the Walter Defends Sarajevo museum was news that regional media reported on with open excitement in 2019 as a rarely successful practice of preserving film heritage, as well as an example of creating new tourist attractions in the BiH capital.

Walter Defends Sarajevo is much more than a film; this masterpiece of a war action film by Hajrudin Siba Krvavac  has become a pure brand of popular culture in the former Yugoslavia over time, and is one of the symbols of modern day Sarajevo.

The fame of this film has long since crossed the borders of the former Yugoslavia, making it one of the most popular films in faraway China. The Chinese were the most common guests of this museum, but those from Serbia, Slovenia, Croatia, and Montenegro did not lag behind, alongside a significant number of visitors from Western European countries who are interested in the collective memory of World War II and European anti-fascism.

The museum itself is modelled on similar examples from around the world, and is an attractive combination of museums of wax figures, scenographic reconstructions from the film, with an audio-visual ambience that takes us back to the atmosphere of film and Sarajevo from World War II.

The museum opening initiated a number of other parallel processes, the Walter Defends Sarajevo start-up tourist tour, awaking interest of both the Chinese and global film industries for remakes of films by Siba Krvavac.

Unfortunately, the Corona virus has temporarily stopped further expansion of this museum, and its full establishment on the map of Sarajevo’s tourist offer.

As the initiator of the idea of opening and setting up the museum itself as part of activities run by Sarajevo Film Center, I am pleased with the renewed interest in this museum. The newly elected administration of the City of Sarajevo wants to get involved in the development of this unusual cultural and tourist story, and are considering options for a new, much more attractive location in the old town – the most attractive tourist part of Sarajevo.

Just before the pandemic struck Sarajevo was experiencing its tourist boom, and these types of projects were welcomed with the idea to improve the tourist offer for hundreds of thousands of tourists, attracted by the magnetism of the historical heritage of our city on river Miljacka. 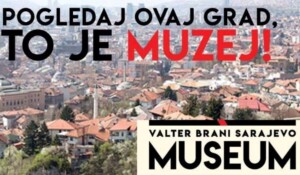 At the same time, this museum has shown how culture and art, in addition to their importance in this field, can become a marketable brand with tangible value, this time in tourism.

A lot is yet to be done so that Sarajevo can justify the epithet of a Balkan tourist attraction in every respect. Without modern infrastructure and a mature tourism industry, results will not be satisfactory.

Today’s world is looking for stories that are attractively told in a museum space, as well as infrastructure and a well-designed tourist offer in destinations like Sarajevo.

The genius of the ‘partisan western’,  author of the film Walter defends Sarajevo, could not have imagined that so many years later he would continue to be popular with a wide audience, and that museums would be set up based on his films.

No city can have a spirit without its people. There can be no spirit without creative people like the director Krvavac either, but also without an awareness of one’s own significance and potentials.

That is why the spirit of people like Hajrudin Siba Krvavac, but also of all those who participated in the creation of a film that inspires today’s filmmakers, and entire generations will forever stand above Sarajevo; a historical city where turbulent history brought difficult moments but also left behind signs, history and great stories. This spirit above Sarajevo says briefly: