Albanian sport, as everywhere in the world, is a vassal of politics. Shapes, image, colors may change, but the phenomenon is the same … 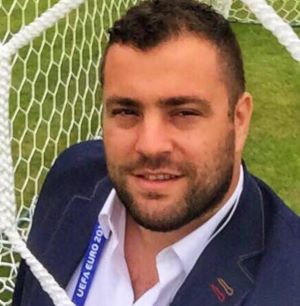 In today’s world reality there is no area of social life that is not influenced, conditioned and controlled by politics. Sport is no exception. Claiming its apoliticalization is something no one believes.

With the rise of importance and popularity, in the second half of the twentieth century, sport became an important issue for society and, consequently, for politics.

The presence of politics in sports is now a reality, accepted as normality. Sport has even become a vassal, put at the service of politics, which uses it for its own needs whenever required. Sport, as ‘a victim’, lowers its back, otherwise it gains nothing…

This phenomenon is not exclusive to the years of democracy in Albania. Even the dictatorial regime of Enver Hoxha, has used sports whenever needed. The organization of the Sports Spartakiads were national events with a genuine propaganda character.

Even during the last legislature, before the change of the political system in our country, the prominent volleyball player Hysen Domi, was part of the People’s Assembly although he was not a communist. Among the deputies, someone was needed to represent sports. The example of Chinese ping-pong players was also used by the women’s volleyball team of Dinamo, which in 1990 in the finals of the European Cup, were the first Albanians to shake hands with the Russian volleyball players of Uralocka. A month later, after 29 years, diplomatic relations between Albania and Russia were restored.

After the ’90s, with the socio-political changes that took place in our country, the colors changed, but not the phenomenon. It even became more visible, becoming a social normality.

Sports leaders were the first to suffer. Agim Zeka, a member of the Republican Party, got appointed chairman of the Union of Physicalists and Athletes of Albania, removing Ali Vukatana of the Albanian Labor Party. All former leaders of sports federations were removed from office with no regards to their professional skills. Within the servility of sport to the new political regime, the Albanian Football Federation elects as president Edmond Spaho, Minister of Tourism during the rule of the Democratic Party. Other federations, or sports clubs, started to follow suit. The late former MP, the Torch of Democracy, Azem Hajdari, was elected president of the Vllaznia club.

Former prominent athlete Marjeta Zaçe, who in the early days was positioned in the Democratic Party, in a reshuffle of the Meksi’s government, in 1996 was appointed Secretary of State at the Council of Ministers.

As a result of the state intervention in sports, specifically in the Albanian Football Federation, in 1996, FIFA excluded Albania from international activities. The country withdrew and relations with the world football government normalized…

But let’s get closer to our days. Prime Minister Edi Rama used the national football team, as in the case of the Belgrade incident, but also in the magnificent reception after the finals of “Euro 2016”.

The use of sport by politics is done both locally and centrally. Both from the left and from the right. Athletes, as the rest of the Albanian society, are also politically positioned. Recall election campaigns on the eve of elections, local and central. In the podiums of the SP we have seen renowned former footballers as Igli Tare or Sokol Cikalleshi, while in those of the DP, their friends Erion Bogdani, Andi Lila, or Gentian Muça, who also ran for MP in the area of Tirana, under the banner of DP.

Because Albanian sport, like everywhere in the world, is a vassal of politics. Shapes, image, colors may change, but the phenomenon is the same …