Dubravka Stojanovic, Belgrade: The nation – a dark object of desire

Dubravka Stojanovic, Belgrade: The nation – a dark object of desire

The language of nationalism uses exclusively big words: Identity, History, Tradition, Language, Scripture, Symbols…. It does not descend from those heights – it does not see the people. In fact, it is not bothered by the ‘real people’ or stooping to that level. 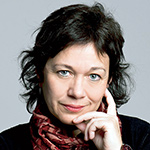 Why do I say this? The language of nationalism uses exclusively big words: Identity, History, Tradition, Language, Scripture, Symbols…. It does not descend from those heights. It doesn’t see contaminated rivers, polluted air, the sick and the poor, the unemployed, landfills, crippled forests, run-down hospitals, uneducated youth… In other words – it does not see the people. In fact, it is not bothered by the ‘real people’ or stooping to that level.

Enchanted by the big words, nationalism draws imaginary borders and draws its red lines, writes votive thoughts, sacrifices the future to the glorious past. For nationalists, the nation is in front of and above the people, and imagined greater-nationalist interests are more important than the interests of citizens. Why do I say greater-nationalist interests? Well, precisely because nationalism never reconciles with existing borders, it always sees them much farther, where they once were, where they should be. Anywhere, just not where they are now. That is why nationalism is not interested in what is right here, that is why it cannot even see it, its views are focused on the future, its goals are somewhere far away.

The nationalist view on the nation is therefore not only ahead and above, but also against its people. You don’t need a strong economy and high living standard, freedom of press, strong institutions, an independent judiciary, an autonomous university, critical intellectuals, or the opposition, to achieve nationalist goals. All of the above is seen as an obstacle, a threat to the dream and happiness.  That is why nationalism sees the opposition as treachery, free press as malicious menace, division of power as a weakness, institutions and laws as a problem, critical intellectuals as ‘auto-chauvinists’, whatever that means. In order to achieve its goals, nationalism requires the exact opposite – a strong leader, obedient people, complete control and constant preparedness to defend something, and, well, to take something as well. And that is why, in the end, nationalist interests are opposed to the interests of the people: the state is against society.

An even greater problem is the state of consciousness that nationalism radiates. Because, identity is built using the image of another; there is no idea of ​​self without the idea of ​​the Other, who is supposedly completely different from us. It is easiest for the Other to be a neighboring nation or, even better, a national minority. They are there, we know them well, and they are certainly guilty of something. In order for US nationalists to look better, bigger, older and more beautiful, it is necessary for the Others to be worse, smaller, younger and uglier than us. Hence the sense of superiority among nationalists. And as soon as we are superior, we have greater rights. And when we have greater rights, it is time to take them away from the Others. And so, in a triple jump, we arrive at the psychological basis for conflict. There is also a constant impression that the Other is constantly threatening us, that they are the source of all our woes, and we are in constant paranoia. ‘Well, if only they didn’t exist’… That is why crime is the final stage of nationalism, it necessarily springs from it,  as its final realization. And that is why nationalism is not right at all, nationalism eats its children.

Dr Dubravka Stojanovic, historian, tenured professor at the School of History within the Faculty of Philosophy, University of Belgrade