Brajan Brković, Novi Sad: What can I do about any of it!?

Brajan Brković, Novi Sad: What can I do about any of it!? 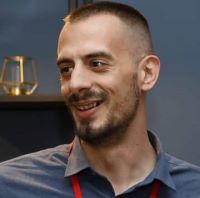 Political engagement of young people in Serbia is a sort of taboo topic in the perception of the young themselves. In the mixture of stereotypes that dominate mentions of political parties or movements, the now famous sentence “What can I do about any of it” stands out among young people, on top of the one that has always been known and is just as destructive as most political parties that held power from multiple parties – “They are all the same”.

We learned a decade ago that in Serbia, politics not only “exhausts” but also “misleads” young people, offering hopes and expectations, which seem to suddenly disappear after political campaigns are over. Over time we have also seen that young people are less and less interested in political programs of the parties, although the fact is that the vast majority of young people have left Serbia in the past ten years, and/or are preparing to leave Serbia after finishing school.

I believe that part of the political parties turned their backs on the problems of youth because the young simply do not represent a reliable and large enough voter category for them. This is further supported by the fact that the number of MPs under 30 years of age in the Republic Parliament is slightly below 6% (14 out of 250).