Altin Hazizaj, Tirana: If not today, when?

Altin Hazizaj, Tirana: If not today, when?

There hasn’t been any other social group in our countries whose rights are the same, but then you can’t enjoy them, because politicians, society, colleagues, friends and family would tell you that its not time yet! 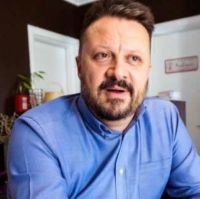 The last prisoner of conscience in Albania came out of prison in 1992, after serving almost 12 years for having sex with another adult man. Albania and Romania were the only countries in Europe where if found to have committed a sexual relation with another man, one could be sentenced for up to 15 years in prison. Considered “sodomy” laws they are not any more enforced across the Balkans.

Balkan countries have strived for the last 20-30 years to progress towards the respect and equality for the LGBTIQ persons. Yet the situation for many of them remains dire if not hopeless. Although legally the discrimination of people based on their sexual orientation and gender identity (not necessarily gender expression) is prohibited, their situation, whether it improves or gets worst depends on the humour of few leaders and politicians. Even few achievements in all Balkan states so far can be attributed to the pressure of the modest LGBTI movements and even fewer allies that want to see their friends and countries to be “normal” and accept that gays, lesbians, bisexuals, transgender or queer can enjoy and express freely, publicly, and happily their love and sexual life, just as any other person.

A month ago in North Macedonia, an Albanian-speaking LGBTI activist was almost left dead in front of his mother, while visiting the grave of his father in Tetova. The gang that beat him up were not happy that an Albanian man could be gay and could speak about their rights. The police have not arrested anyone for this hate crime, while not a single politician came in support of the activist. In Kosovo the lawmakers for years have failed to approve changes to the Civil Code fearing that they may grant equal rights to marriage for same-sex couples, even though the Constitution guarantees that.

The situation is not any better in my home country. Proposed changes to the Family Code and the Law on Adoption, were hastily thrown away because of the pressure from the religious communities, who considered them as a “hidden job” from the LGBT community. A year-ago a transgender person was left with a fractured jaw from a gang of ten young men, at the height of a public debate on using respectful gender pronouns in the Albanian language. Transgender people are often the victims of discrimination and hate on behalf of all the LGBTIQ community. Almost all transgender persons in Albania survive by doing sex work, while across the Balkans police often pick on them or ignore the crimes committed against them.

In Serbia, while only a few years back the LGBTI community could not hold the annual Pride without being seriously threatened from the right-wing extremists, today has a lesbian Prime minister. Yet, the rights she seems to enjoy because of her political position, are not enjoyed by the rest of the LGBTI persons. Even as in most European countries’ marriage equality is a reality and society widely respect the equal enjoyment of rights for everyone, in Balkans marriage equality remains a distant dream, as there are more pressing issues, such as survival, food, decent jobs and salary. As if these are not enough to be concerned (for everyone), one needs to face family and peer pressure for being born ‘that way”, bad jokes from friends and work colleagues or worse, not tell anyone for being LGBTIQ for the fear of discrimination, revenge or hate that can leave you without job, money, social status and sometimes dead! That’s not a prospect that everyone is ready to face. Hence, why so many young and older LGBTIQ people have left their countries to build a life in countries where they find respect and acceptance for who they are.

Probably this Euro Pride wants to remind all of us how unequal and unjust our societies are and how much we should fight for the rights that we are supposed we have! There hasn’t been any other social group in our countries whose rights are the same, but then you can’t enjoy them, because politicians, society, colleagues, friends and family would tell you that its not time yet! If not today, when?

Altin Hazizaj is an Albanian journalist and legal defender